SUCCESS partner Cmb is currently implementing a Consolidation Centre for Construction (CCC) at the building site of the new tramway line in Florence. Besides the storage of material, which can’t be stocked on site, the CCC brought several other important benefits for the management of the building activities.

Florence is world famous for its artistic and architectural heritage; thousands of tourists visit the city every day searching for its treasures that make its historical centre unique. However, also Florence must face the problems that afflict big Cities in Europe: traffic congestion and pollution of urban environment.

The Local Authorities of the Tuscany Region have been engaged for years, in promoting “green” politics for a more sustainable mobility and the City of Florence signed the “Covenant Of Mayors” (http://www.covenantofmayors.eu) in 2010 which is considered the biggest urban enterprise, on a worldwide level, for climate and energy. With this commitment, the city aims to reach and exceed the EU target of reducing GHG emissions by at least 20% until 2020 and by 40% until 2030.

Tommaso Cacciaguerra, engineer and project manager at Cmb, explains that Cmb is one of the main construction companies that cooperates for the achievement of this target as it is engaged in the construction of line 3 of the new tramway of Florence (120 million euro in share part financed by the EU) that will enable to reduce an important amount of CO2 produced by urban transport means with traditional fuels.

Sustainable building in the heart of Florence

Regarding the context, it is a logical consequence and necessity that exactly this construction site in the heart of Florence is currently using a Consolidation Centre for Constructions (CCC). Its implementation could also be reached thanks to Cmb’s participation in the SUCCESS project that is considering how to improve the management of the logistics of construction sites, in particular by the introduction of Consolidation Centres.

Lorenzo Barnini, transportation engineer in charge of the logistics of the construction site in Florence, explains that from the very first phases of planning the works, it was evident that the main obstacles for the supply of materials were the lack of suitable storage areas as well as the entrance regulations for heavy transport vehicles to the city centre as Florence disposes of one of Europe’s biggest ZTL areas (areas with limited traffic). Thus the challenge was to find a solution allowing the daily delivery of tons of building materials to their final destination areas within the fixed time frames by using defined routes in the respect of regulations and traffic restrictions.

To achieve this target it was necessary to involve all the actors concerned by the organisation process of the construction site logistics including representatives from the City. It has thus been decided to organise weekly coordination meetings which involve Cmb’s engineers, the competent offices of the City Council of Florence, the Municipal Police, the companies that run urban and suburban busses, the company managing the municipal street cleaning, the association of taxi drivers as well as the president of the city quarter in representation of the citizens. 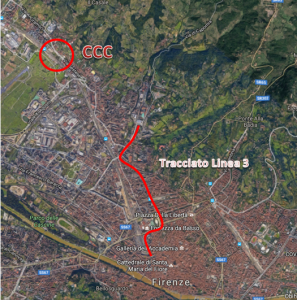 Beside these coordination meetings and to manage the transport of materials to the construction site, a “CCC” has been created along Via Sestese which is a main thoroughfare for crossing the city centre and located about four kilometres away from the barycentre of the construction site. Its location has been chosen together with the City Council of Florence that has granted, in free loan, a part of a parking area close to the Company Trafiter Scarl (Cooperative company of which Cmb is the main construction company) that won the construction contract.

The CCC is managed by the Trafiter Company’s staff. All companies that are part in the association, and therefore involved in the construction works, can take advantage of it. It is managed by a warehouse-keeper who also participates in the loading and unloading operations of the arriving and leaving goods. 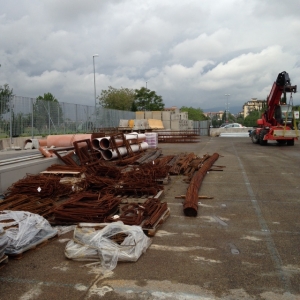 All construction materials for the new tram line transit through the CCC, including the marbles for the platforms of the stations that arrive from the Republic of China. The only exception is fresh concrete; due to its characteristics it has a traditional management and is directly delivered to the construction site. The CCC is located in an area without any particular restrictions for heavy vehicles so all kind of deliveries and lorries can easily reach it without weight or time limits.

The CCC also provides an external area near the entrance where heavy trucks can stop during the night while waiting for the CCC to open in the morning.

The methods and possibilities of loading and transporting materials change thanks to this logistics junction. In general, the CCC is supplied by lorries with trailers and articulated trucks with a big capacity more suitable for driving on fast flowing main roads. However, when they reach destination, these vehicles need assistance for unloading operations and enough space for their manoeuvres which is often difficult at construction sites in urban areas. The CCC in Florence provides both; lifting vehicles are available to unload the arriving trucks. The material which leaves the CCC to be delivered to the construction site is loaded on smaller trucks or vans which are more suitable for driving in the city traffic and often dispose of own cranes in order to be more independent in the unloading operations. 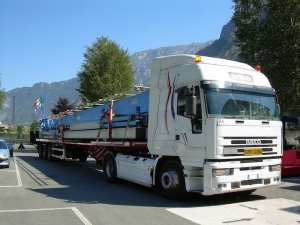 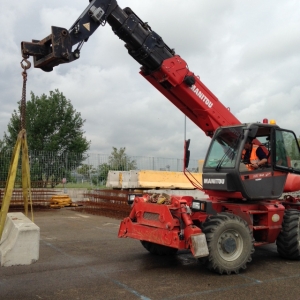 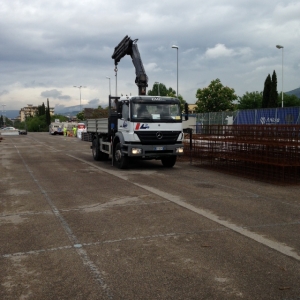 Positive impacts on the building activities thanks to the CCC

The choice of introducing a CCC in the management process of supplying this construction site is surely beneficial and necessary. Even if it may seem that it is just a stocking area for materials due to the lack of space at the construction site, it has moreover brought a serious range of important benefits for the management of the building activities such as: